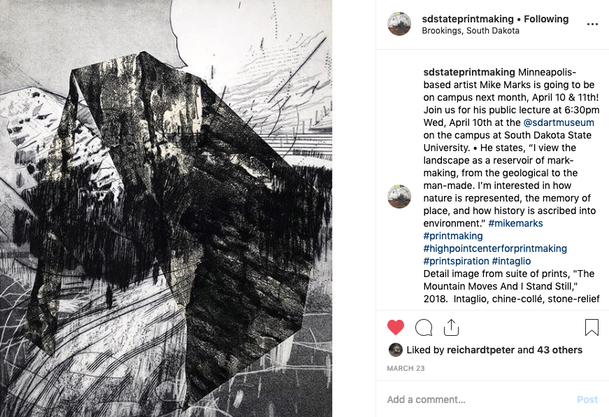 01.15.19
I'm so excited to announce that I am a recipient of a 2019 Minnesota State Arts Board grant!  The support of this grant will help me focus in on my first solo show in the Twin Cities.  To view a list of grantees visit the Minnesota State Arts Board
01.12.19
Shifting Baselines is now open! The show runs through February 16, 2019 at Form+Content Gallery in Minneapolis.  It features the print-works by myself, Teréz Iacovino, and Ruthann Godollei.

09.14.18
Excited to have my print, "How The Highlands Laid Low" accepted into the 2018 Pacific States Biennial, North American Print Exhibition
Show is open November 2 - December 28, 2018 at University of Hawaii, Hilo 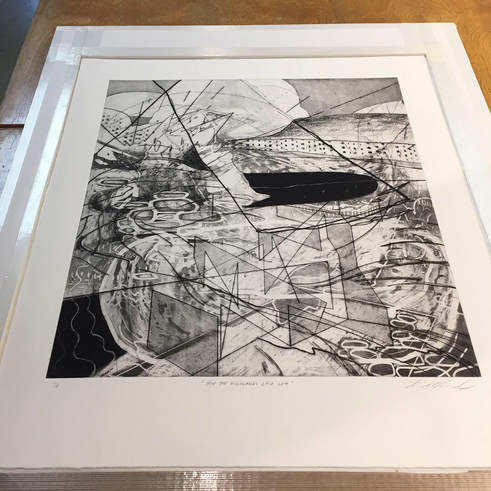 Coming out of my residency at Highpoint, this summer was spent researching and traveling for new ideas that will be coming this fall.  August however has been a very busy month, with three simultaneous exhibitions up this month:

Me, You, And A Few Of Our Friends - Anne Wright Wilson Fine Arts Center | Georgetown College, KY

The show is installed and up through June 30th at Highpoint! Thanks to everyone who came out in support of the great printmaking and art community being cultivated here in the Twin Cities! 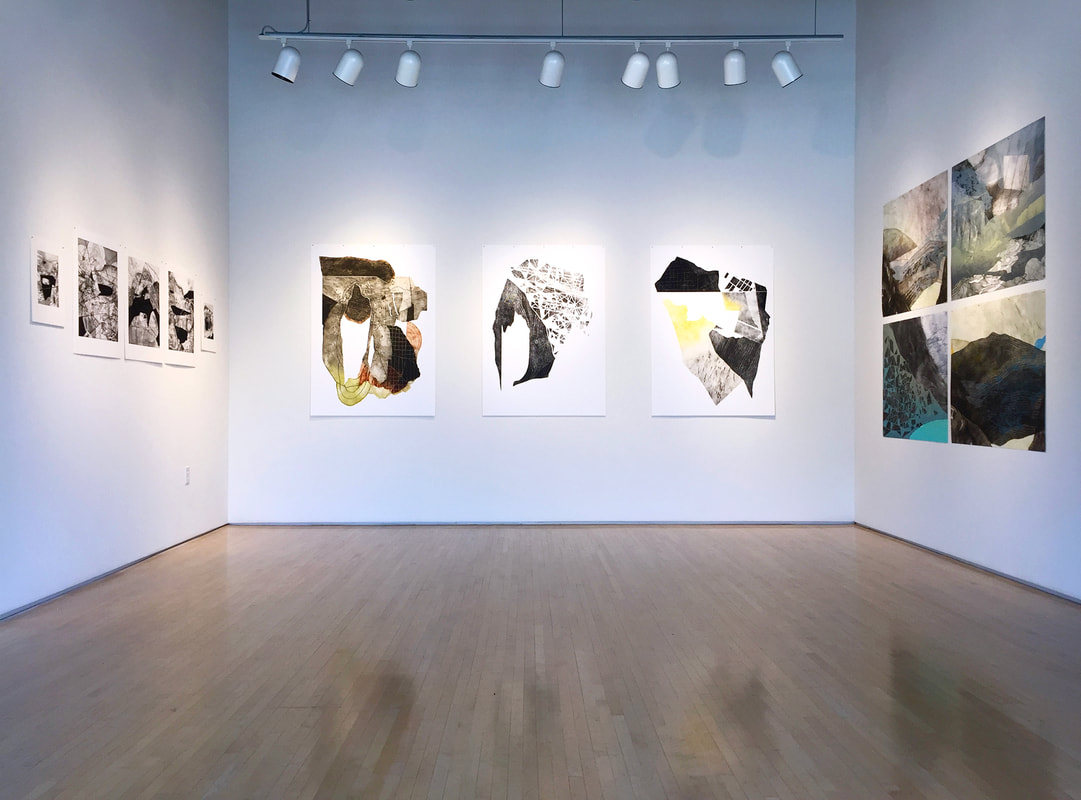 Hard to believe it's been nine months and my time as a Jerome Foundation Emerging Printmaker at the Highpoint Center for Printmaking is coming to an end.  Exhibition runs 05.18.18 - 06.30.18, opening at 6:30 pm

Really excited to share these new bodies of work, and thankful for all the support from Highpoint and the other two Jerome Fellows during this time.

In other news, I've been invited to exhibit at Minneapolis gallery, Form + Content in January 2019  More details to come. 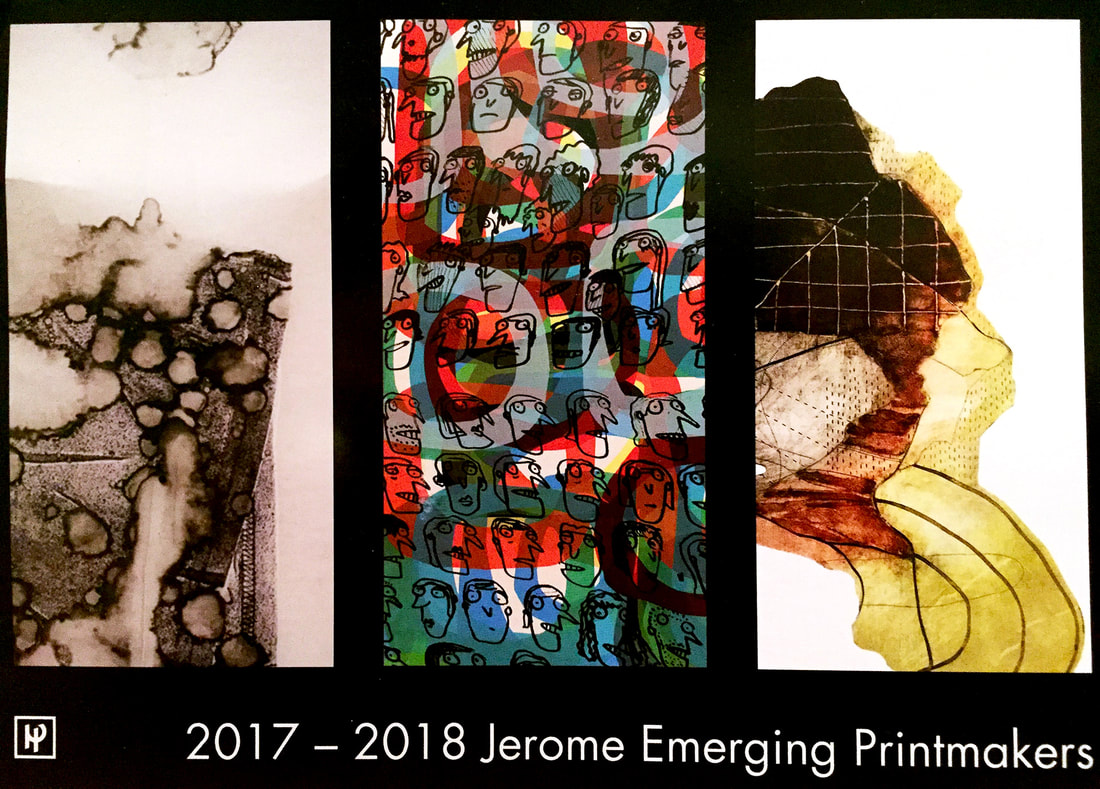 ​10.20.17
Had the fortune of being invited to teach a weekend-workshop about carborundum printing and collagraph at Paperworkers Local in Birmingham, Alabama.  An amazing shop full of amazing artists who are carving out a printmaking presence in Birmingham. Paperworkers Local was created by Michael Merry, a talented printmaker and draftsman and friend.
​Lots of fun and bbq! A few shots below, including a demo I did outside the studio of how to make Wisconsin Brats!

Link to shop and workshop description:
www.paperworkerslocal.com/learn.html
09.01.17
Could not be more honored to announce that I was chosen as a 2017-2018 Emerging Printmaker in Residence through the Jerome Foundation at the Highpoint Center for Printmaking in Minneapolis! The residency will be culminating in an exhibition of the three artists in residence in May 2018.

For more information about the residency: ​
highpointprintmaking.org/accessforartists/jerome-residency-2017-2018/ 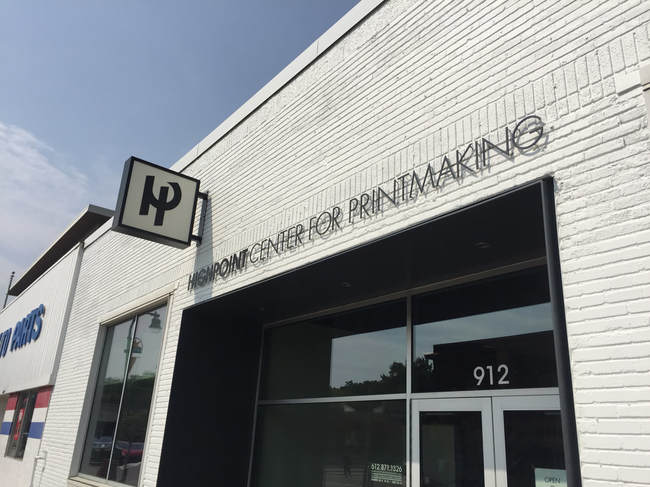 05.23.17
Very excited for my print, "Golden Tailing (New Canyon)" to be on display at Global Print in Portugal August 1-September 30 2017.  Shipped it out this morning! This exhibition surveys contemporary printmaking from around the world.  In addition, I've been invited to show in the 9th Annual Printmaking Biennial (Bienal Do Douro) in Aljio, Portugal in 2018 (Aug-Oct.)! The exhibition is curated by Nuno Canelas.  Really, couldn't be more honored.

In other news, my recently finished mixed media print/drawing, "Supersonic Pause/Fast Forward," is finished and shipped to Maine for the June exhibition Now and Then.  Had a blast creating this piece.  The show's theme is for artists to respond to a piece from the collection.  Here's my explanation of my work and the decisions behind it:
​
"I chose to respond to the PPL’s phoenix rising out of Portland because of its playful take on the city’s motto through pattern and material, and because it looked to me like the phoenix was both resurrecting and destroying the city.  This brought back childhood memories of monster-movies, and I converted the phoenix to 1956’s Rodan.  Like most monsters from the Godzilla films, Rodan is a product of environmental disasters created by humans.  Thinking ahead to our future as defined by climate change and rising seas, when will come a time for Portland to rise once again (and somewhat literally) to the challenge of a changing landscape around it? In this piece, the buildings have been fractured by fire and sea alike, and Rodan looms over us as an invitation to confront the future." 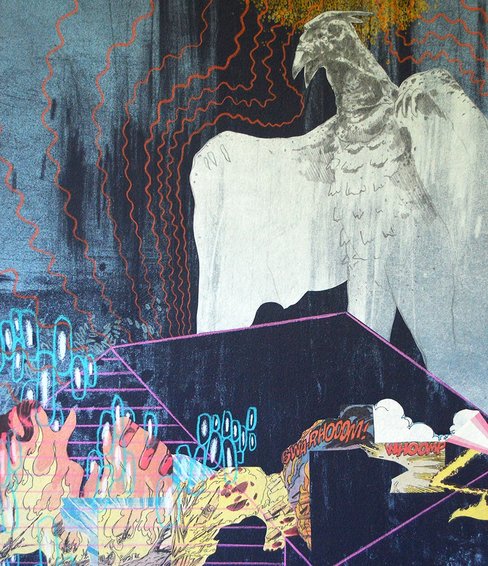 Entering into week three of our Carborundum and Collagraph Workshop I'm running at the Highpoint Center for Printmaking.  Students' work is really starting to come along! 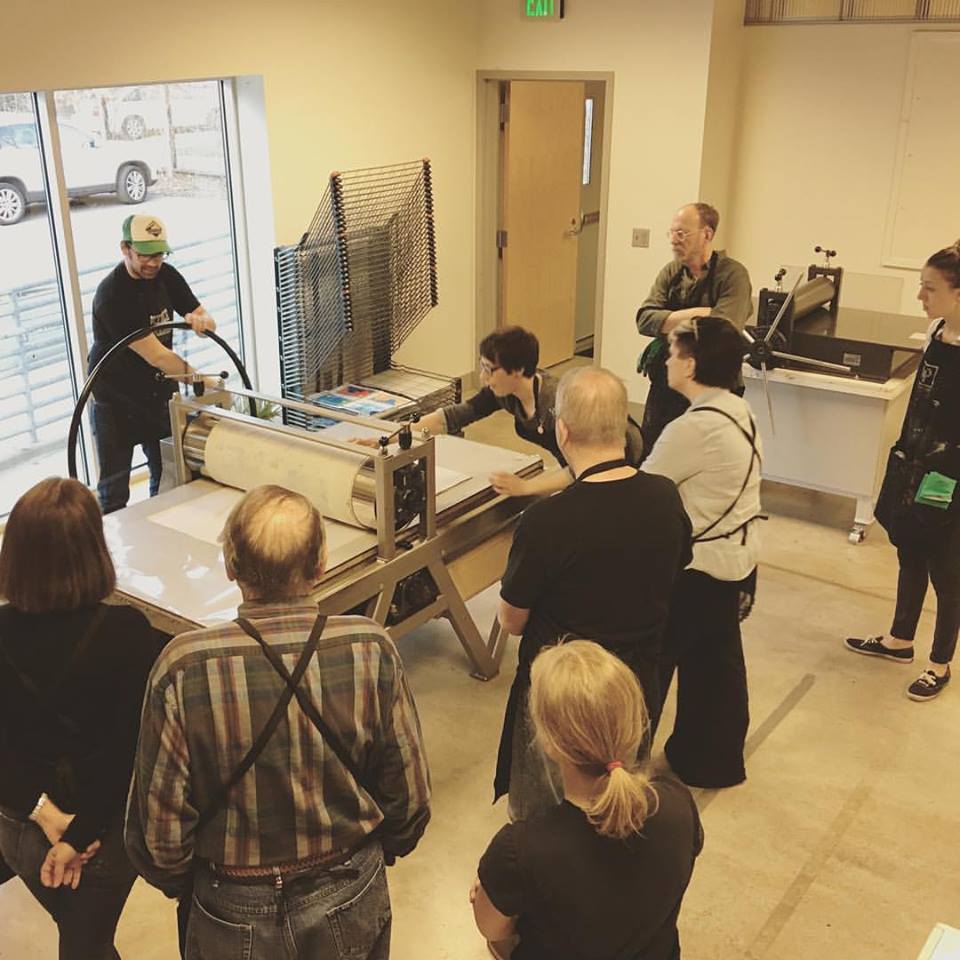 It seems spring has come early here in Minnesota and Wisconsin.  Although the studio has been keeping me busy, I've still found a few moments to break away from time to time to hit some water and fly fish.  Been tying lots of new patterns taboot, so the experimentation has been on and off the water in all kinds of ways.  Also, did some exploring up the north shore several weeks back.  Lots of inspiration!!!
02.09.17
Lots of updates:
- Upcoming 181 Performance at Practice Gallery in Philadelphia come March.  Details soon.

-Just announced exhibition that is a retrospective of past artists-in-residence at the Crooked Tree Arts Center in Petoskey, Michigan come October.  More details soon.

- I'll be running a workshop at the Highpoint Center for Printmaking in Minneapolis beginning March 28th on collagraph processes, specifically using carborundum grit as a tonal ground for ink.  Should be really fun!

12.14.16
Upcoming collaboration, "Tomorrow Hasn't Been Born Yet," a special performance at Taiga Art Space in St. Petersburg, Russia.
Taiga Art Space has the reputation of being one of the only artist-run spaces in Russia that has remained free from state influence, and given all the news these days with Russia and the U.S. it's a nice reminder that there are communities everywhere striving to offer challenging experiences and create safe spaces for its members to have dialogues.  With Abby Donovan and The 181
http://taiga.space/in-taiga/5548 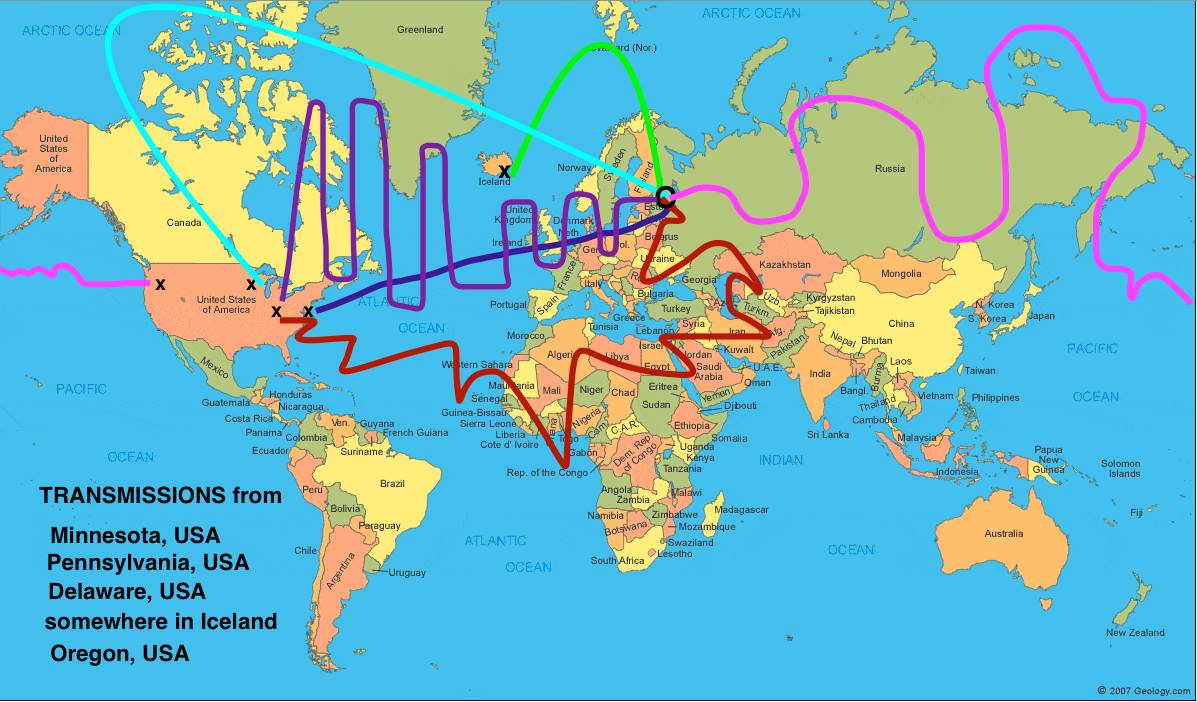 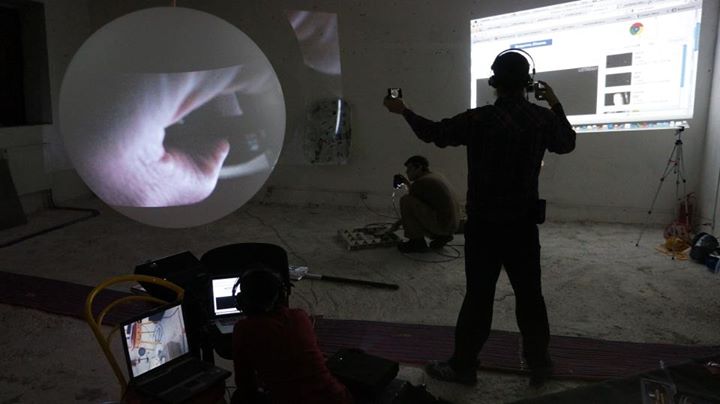 12.09.16
Opening tonight at Highpoint Center for Printmaking, "Prints on Ice: 30th Cooperative Exhibition."  Very excited to have four prints on display in this exhibition.  Come on by and see all the amazing work by local artists! Show runs 12/09/16 - 01/21/17 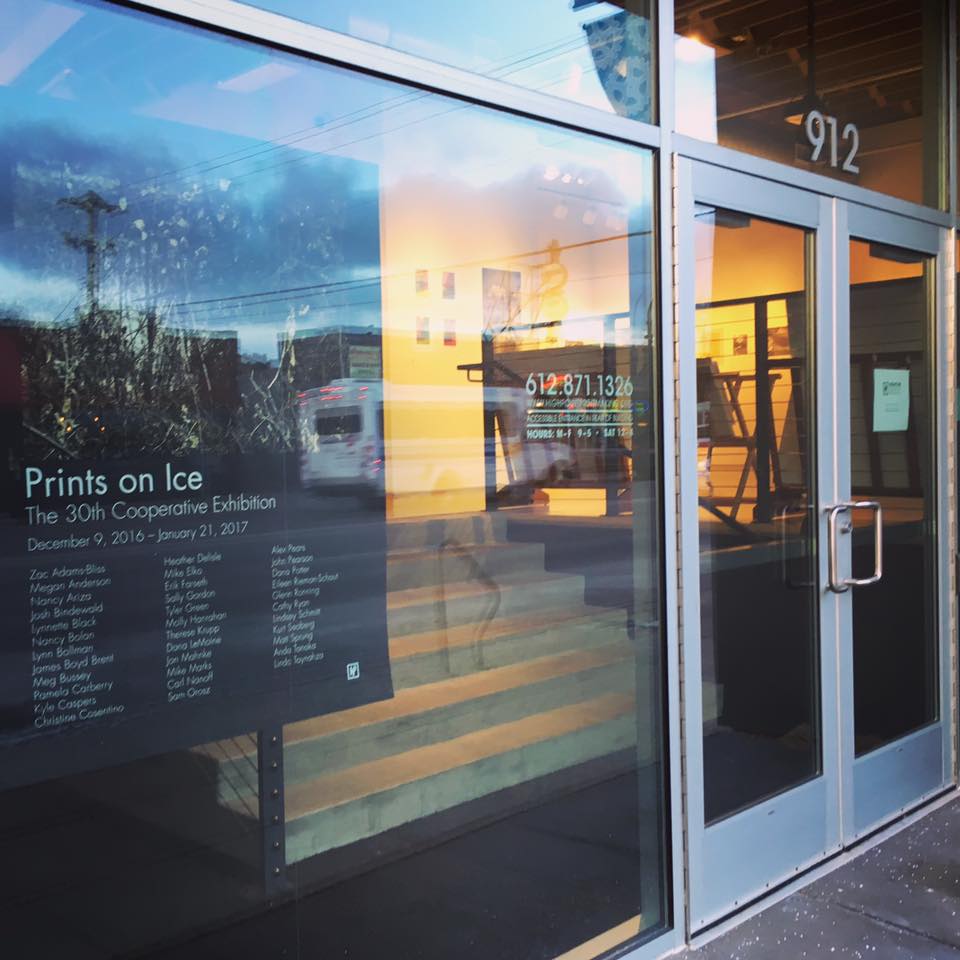 11.15.16
I'm very excited to have been accepted as a working member at the Highpoint Center for Printmaking in Minneapolis! It's an incredible studio and I can't wait to dive into new projects there.
http://highpointprintmaking.org/
09.24.16
Upcoming collaboration, "The Division of Mounds Exploration" with The 181 at Vicki Projects in Newburgh, NY

09.01.16
We've successfully made our big move across the country from Maine to Minnesota! Coreena's (http://www.coreenaaffleck.com/) new position as Head of Ceramics at a local private school in the Twin Cities brought us here, and I'm now in transition mode to re-building the studio in a new place.  Here's to the future!
05.11.16
Heading up the coast to teach carborundum printing at Haystack Mountain School of Craft in Deer Isle! SO excited! Being joined by my great friend and magnificent printmaker, Katie Loesel.  Images coming soon!
03.28.16
Pilar Nadal (owner of Pickwick Independent Press and all that rules!) and I collaborated on a limited edition print/poster for the Jonathan Richman concert coming up at Space Gallery! Been a lot of fun putting this together (this being Jonathan Richman's shirt quantum-leaping through space and time).  Print is collagraph, pronto plate litho, and screen print.  Edition of 25


​
11.08.2015
A busy end of summer and fall: currently showing in MAPS in Aomori, Japan, at the Munakata Shiko Memorial Museum of Art.  Also collaborated with The 181 through a live streaming projection/sound performance in October at The Unity Gallery at Maharishi University in Fairfield, Iowa.  Was an exciting event you had to be at! However, my contribution of live video/upright bass performance can be viewed here: ​http://www.ustream.tv/recorded/75184532 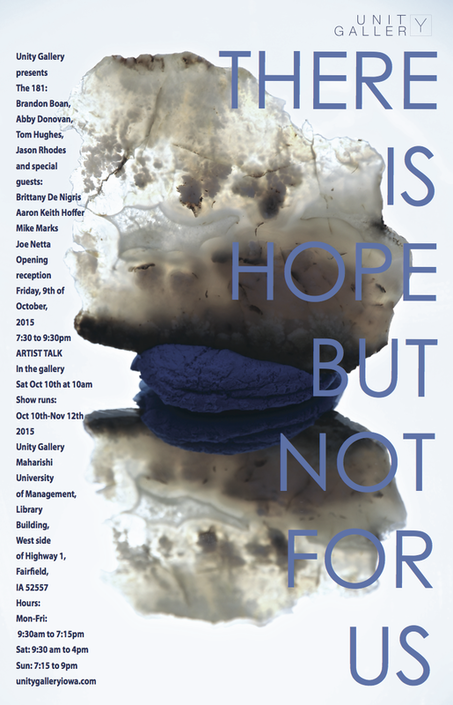 07.15.2015
Just received a New England Emerging Artist Grant through the St. Botolph Foundation in Boston, MA.  Very excited! There will be a group show of the recipients in Boston in early October.  More info to come.

Also in talks with the Haystack Mountain School of Craft here in Maine - will be teaching a 4-day workshop in May of 2016 in Deer Isle.  More info to be posted when the schedule is pinned down.
07.13.2015
A whirlwind of events for the last several months.  Was a Visiting Artist in an intaglio class at MECA in Portland back in April.  Beginning in May I spent about five weeks as a Visiting Artist-in-Residence with the Crooked Tree Arts Center, based out of Petoskey and Traverse City, Michigan.  A brief week off was followed by another month as a VIsiting Artist-in-Residence at the Tides Institute and Museum of Art in Eastport, Maine.  Images being posted soon!

Below: working out of StudioWorks! at the Tides Institute in Eastport 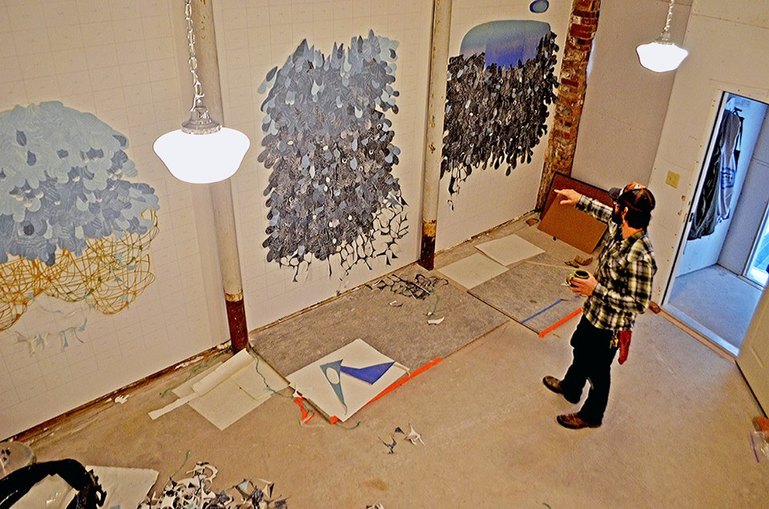 01.28.2015
It's been a busy six months from striper and pike to landlocked salmon and steelhead - summer to fall and now into winter, where I finally have found some time to update the news.  The printshop has been busy and I have many new works on the way; a good followup to being in shows out at the California College of Arts, Little Pink Monster Gallery (Austin, TX), and currently a show at the Reinberger Projects Gallery at the Cleveland Institute of Art in Ohio.  I'll also be co-instructing a workshop on framing through MECA and Casco Bay Frames on March 29th! C'mon and sign up!
06.23.2014
I've been on a terror in the print studio at Long Island University in Brooklyn in-between teaching, working on the larger prints of the Lake Lines series as well as some new intaglio and relief prints unrelated to any of the ongoing series.  Will be a participating artist for my fifth year now at the Cape Elizabeth Paint for Preservation benefit auction to help fund conservation projects in the Cape, on July 13th in Cape Elizabeth, Maine.  See here for more info: http://www.capelandtrust.org/paintforpreservation/2014/   The following weekend (July 18-20) I'll be back in my home-shop at Pickwick Independent Press in downtown Portland, running an intaglio workshop.  For more info see here: http://pickwickindependentpress.com/workshops